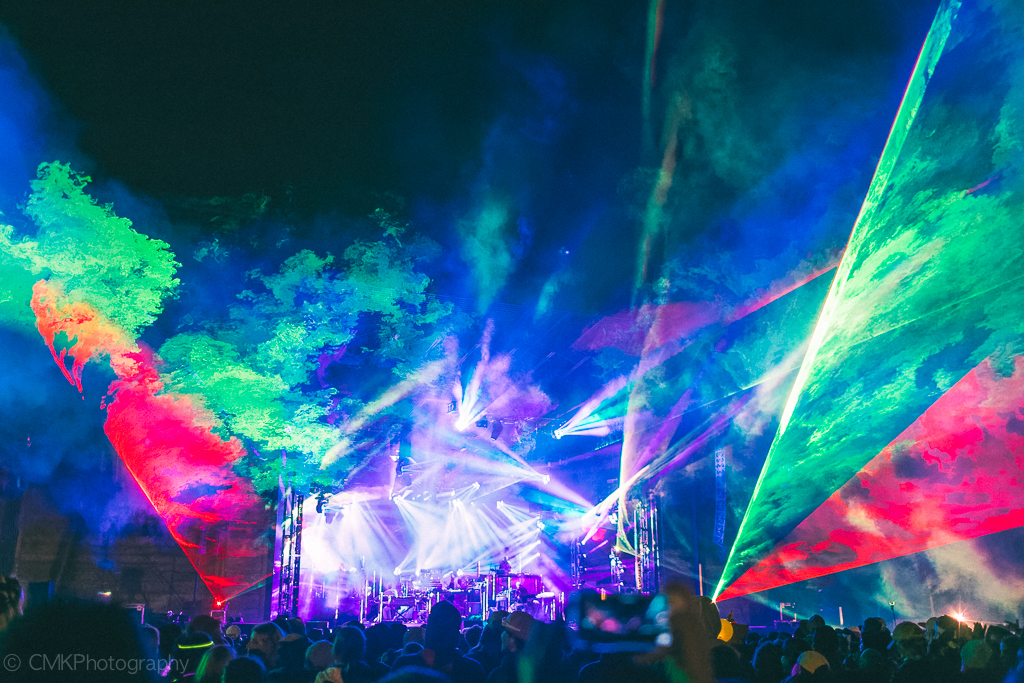 This last weekend August 26th and 27th Pretty Lights returned to Telluride, Colorado for a two-day festival at the Town Park. A banner welcomed attendees; fans lined the streets anxiously waiting, and the music was pouring from the venue while Derek Vincent Smith performed a three-hour set each night. Blending music and innovative production with the beauty of a historic mountain town, the event must be experienced to be understood. Who’s ready to learn about his most anticipated show of the summer?

The photos in this feature are courtesy of Chris Kocher, a festival photographer, and owner of CMK Photography visit www.cmkphotography.net for more stunning visuals. Follow him on Instagram @tophercmk. Based in the San Fransisco area do not hesitate to contact him as he is an avid music and landscape photographer currently traveling around the US in hopes of calling Boulder his new home.

Arriving in Telluride on Thursday, August 25th a day before the first day of the festival was a perfect way to begin my first time exploring the San Juan Mountains. What an incredible drive! I had never seen the Black Canyon of the Gunnison National Park before, and all I can say is Colorado is a unique state with landscapes that change it feels like every twenty miles. After arriving, I watched a hail storm from the condo balcony and enjoyed looking at the aspens that cover the area. That night I went to the Mountain Village for the first time for a round of drinks at the Black Iron Kitchen and Bar and then for dinner in town at Brown Dog Pizza.

Friday morning I enjoyed a little sunshine while exploring. Out of the mountain towns I’ve been too Aspen, McCall, Sun Valley, Park City — Telluride now holds a special place in my heart. The rugged beauty provides chill vibes that make you want to kick back and enjoy the views while also inspiring you to get up and take in all the area has to offer. Despite some afternoon rain, I was able to explore the Town Park Camping and met up with Chris Kocher who as stated contributed the gorgeous photos.

The first night began with music shortly after eight o’clock when Derek Vincent Smith took the stage with the Analog Future Band, Episodic 3; who’s members include Chris Karnes, Borhem Lee, and Alvin Ford Jr. Due to the rain, there are no images from Saturday night, but you can enjoy the photos from Friday. Night one consisted of classics likes “Someday is Everyday – Passing By Behind Your Eyes” and “Sunday School” along with new tracks. After the show had wrapped around 11 pm, it was time to hit the Late Night Radio (Vinyl Restoration) + Marvel Years (ft. Colby Buckler) + Mickey Thunder After-Party at Fly Me To The Moon a sick time that kept jamming until two that morning.

Night Two was a party and the highlight of my weekend in Telluride. Having seen Pretty Lights perform around ten times, I can say that the second night was one of my favorite performances only behind my first time seeing him at The Gorge Amphitheatre. He dropped “Dark As The Sky”, “Yellow Bird”, “World of Illusion,” “Drift Away”, a sample from the Beastie Boys and had time for an epic rap session. Performances at The Sheridan Opera House was an excellent way to bring a dope weekend of music to an end. The after-party featured Borahm Lee w/ Chris Karns, Colby Buckler, Eliot Lipp (Special Vinyl Set) and Party People.

The next morning I returned to the Mountain Village to ride the Gondola while it was sunny. Before leaving, I took photos from the San Sophia Overlook where my friends and I spotted a waterfall on the other side of the mountain. What an incredible weekend I will never forget can’t wait to drop media coverage next year! Thanks to my friend Chelsea Strauch for inviting me wouldn’t have made this unforgettable trip without her 🙂

Minnesota in Denver, Colorado at Ogden Theatre on April 13, 2018